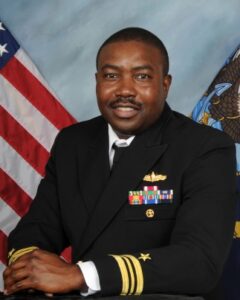 Lieutenant Commander Chavius Lewis was commissioned in the U.S. Navy as a Surface Warfare Officer in 2000 and has served on a variety of ships throughout his military career. He is from Sylvester, Georgia and graduated from Georgia Southern University with a BS in Kinesiology. He earned an MBA in Financial Management from the Naval Postgraduate School in 2007. His key assignments include Flag Aide to Commander Amphibious Task Force Seventy Six, Weapons and Combat Systems Officer onboard USS Cole (DDG 67) and Commanding Officer of USS Pioneer (MCM 9) and USS Dextrous (MCM 13). Chavius has deployed to Europe, Asia, the Mediterranean, and the Persian Gulf. 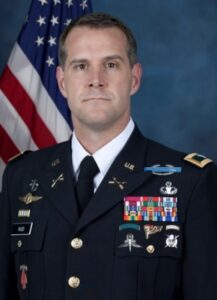 Colonel Josh Rudd is a Special Forces officer from Fort Mill, SC. He joined the Army in 1993, receiving his commission through ROTC as a Distinguished Military Graduate. He began his Army career as a Quartermaster Officer and in 1997 he was selected for Special Forces training at Fort Bragg NC. Since then, he has commanded Special Forces units as a Captain, Major and Lieutenant Colonel. Colonel Rudd has a vast Special Operations background with extensive Joint and Inter Agency experience in Central/South America, Central/Western Asia, and North Africa. His combat experience includes both command and staff positions during multiple deployments to Iraq and Afghanistan. Colonel Rudd earned a M.A. in National Security and Strategic Studies from the Naval War College and received his B.A. from Furman University where he majored in Political Science. 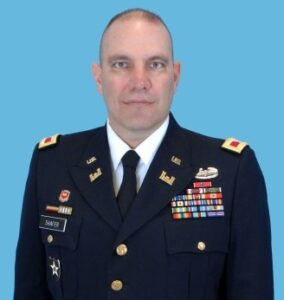 Colonel David Shafer graduated from Marshall University with a Bachelor of Arts and a Master of Science.  He enlisted in the National Guard in 1988 and was commissioned as an engineer officer in 1989.  His combat experience includes two deployments for Operation Iraqi Freedom.  In 2003-2004 he deployed as the Operations Officer of a Combat Engineer Battalion and in 2007-2008 he deployed as the Executive Officer of an Engineer Brigade.  His other key assignments include two Company Commands, Battalion Command, and Deputy Brigade Command.  He has extensive experience in military support to civil authorities in civilian/military operations with service during Hurricanes Katrina and Sandy in addition to more than a dozen other natural disaster recoveries.  He currently serves as the Military Personnel Officer for the West Virginia Army National Guard where he is responsible for the human resource management of approximately 4,120 soldiers.  Previously he was the Construction and Facility Management Officer and completed over $275M in new construction.  In addition, he is a Rider Coach for the Motorcycle Safety Foundation.  He has completed the Lean Six Sigma Black Belt certification and is a completing the Master Black Belt certification.

Lieutenant Colonel Todd Turner is from Atlanta, Georgia.  He earned a Bachelors of Science in Law from the U.S. Military Academy, West Point, NY and a Masters of Arts in Military Operational Arts and Science from the U.S. Air Force Air Command and Staff College, Montgomery, AL.  Todd has served in the U.S. Army, as both a conventional and special operations helicopter pilot for over 20 years and led Soldiers from the platoon to the battalion level while serving in the Pacific, Europe, and Afghanistan.  Todd served as the Commander of a General Support Aviation Battalion assigned to the 1st Armored Division at Fort Bliss, TX from 2011 to 2013.  In his most recent assignment, he served as both the Deputy Director of Aviation and the Executive Officer to the Deputy Chief of Staff for operations, plans, and training with U.S. Army Forces Command at Fort Bragg, NC.