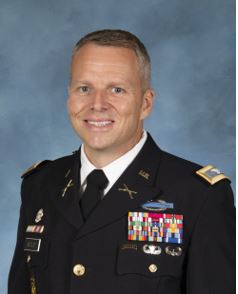 Colonel Dave Butler, US Army, communicates to the US and global public to guarantee the resources, support and authority that our military needs to protect our country. He has communicated on behalf of special operations and traditional military organizations at the tactical and strategic level throughout the world. He’s worked with partner countries to develop and execute communications strategies in several countries including Italy, Iraq, Jordan, Libya, Spain, and Syria. He most recently served as the spokesperson in Afghanistan for America’s longest war.  He holds a Master of Public Administration with a Certificate in Public Policy from North Carolina State University and a Bachelor of Science from the University of Dayton. 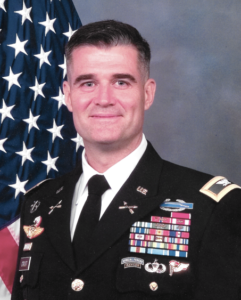 Colonel Ed Croot is an Army special forces officer from Long Valley, NJ. He is a graduate of the University of Pittsburgh (B.A. Business / B.S. Psychology), Army School of Advanced Military Studies (M.A. Theater Level Operations) and Kansas State University (M.S. Education). He joined the Army in 1995, earning his commission through ROTC. He has commanded at the company and battalion level and served on operational assignments in Bosnia, Macedonia, Kosovo, Afghanistan, Yemen, Zambia, Iraq, Bangladesh, and Jordan. COL Croot has interagency and policy experience from two U.S. embassy assignments in Sanaa and Dhaka and multinational experience on both a UN and NATO staff.  He has focused on national security threats in the Middle East, the Asia-Pacific, and Africa. 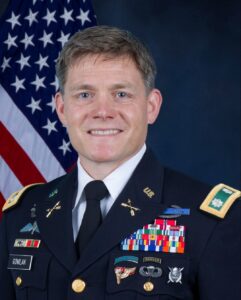 Colonel Matt Gomlak graduated from the U.S. Military Academy at West Point in 1998 and received a Regular Army Commission as an Infantry Officer.  For the past fifteen years he has served in Army Special Forces with operational deployments to Afghanisan, Iraq, the Republic of the Philippines, and various other locations in the Middle East and Indo-Pacific.  He has extensive experience working with U.S. government interagency partners on security and counterterrorism issues.  Prior to attending the Fellowship Program, Matt worked in the Pentagon on The Joint Staff, commanded a Special Forces battalion, and most recently served as the Executive Officer to the Commanding General, U.S. Army Special Operations Command. Matt has a Master of Arts in History from Columbia University.

Aaron Honey, a native of North Carolina, earned a bachelor of arts from Appalachian State University in 2006. After a brief stint in television and stage production, Aaron started his national security career as a Department of Defense contractor in 2007 before transitioning to the civil service in 2010.  His area of expertise revolves around the acquisition and development of unique technical capabilities, and his subspecialty focuses on electronic warfare and unmanned systems.  Aaron served at the Joint Special Operations Command and US Army Special Operations Command. He has deployed to Iraq and Afghanistan to test new systems and has co-chaired an international capability development working group between US Special Operations Forces and United Kingdom Special Forces.  Upon completion of the program at Duke, Aaron hopes to return as a leader in the technical field while continuing to contribute to national security efforts. 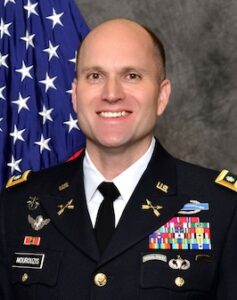 Lieutenant Colonel Mike Mourouzis was born and raised near Dayton, Ohio and commissioned into the Infantry from Penn State University in 1998. For the last fifteen years, Mike has served as an Army Special Forces officer focused on special operations in the Philippines, Iraq, and Afghanistan. He also has extensive experience recruiting soldiers for service in special operations units. Mike attended the Service Chiefs Fellowship Program with Defense Advanced Research Projects Agency (DARPA) in 2014 and holds a B.S. in Biochemistry and Molecular Biology from Penn State University, an M.S. in Chemical and Life Science from the University of Maryland, and an M.S. in Defense Analysis from the Naval Postgraduate School. 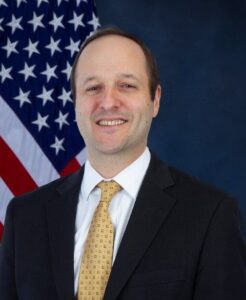 Neil Reedy is an Intelligence Analyst with the Federal Bureau of Investigation (FBI).  Neil’s FBI career began in 2005 working in the Terrorist Financing Operations Section (TFOS) which included coordinating financial aspects of high-priority international terrorism investigations and providing terrorist financing training to domestic and international law enforcement partners.  From 2006 – 2007, Neil served as the FBI representative to the Iraq Threat Finance Cell (ITFC) in Baghdad, Iraq and was responsible for combatting terrorist financing of the Iraq insurgency.  Prior to his arrival at Duke, Neil was assigned to the Counterterrorism Division’s Africa Arabian Peninsula Targeting Unit (AFAPTU) where he helped enhance the FBI’s HUMINT capability to address terrorism threats.  Neil holds bachelor’s degrees in History and Political Science (2001) and a Master’s degree in Political Science (2004) from Villanova University.