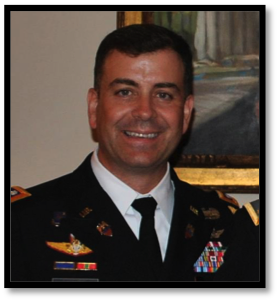 Colonel Chris Black is a native of Albuquerque, NM. After High School, he enlisted in the Army and served in the 75th Ranger Regiment. He left the military in 1989 to attend James Madison University. Upon graduating in 1994, Chris was commissioned as a Second Lieutenant in Aviation. Primarily flying the UH60 Blackhawk helicopter, he has served in a variety of conventional and special operations units and has commanded at the company and battalion level. Chris served as the Professor of Military Science at Vanderbilt University while running the Army ROTC program at Vanderbilt University. Along with his BBA from James Madison, Chris also holds an MS from the National Defense University. He has multiple overseas deployments to include Bosnia, Iraq, Afghanistan, and a variety of countries in Central and South America. 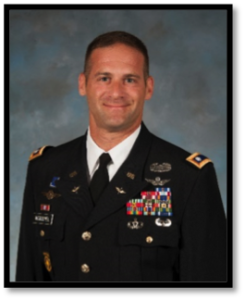 Lieutenant Colonel Matthew Weinshel is an Aviation officer from Fairfield, CT. He received his commission in 1995 through Army ROTC at Boston University where he earned a BA in Economics. He later earned a Master’s degree in Business Administration from Webster University. During his more than twenty years of service, Matt has served in a variety of Conventional and Special Operations units, and he has commanded such units as a Captain, Major and Lieutenant Colonel. LTC Weinshel has significant operational experience in South Korea, the Balkans, Iraq, Afghanistan, and in North Africa. Most recently, he returned from commanding the Special Operations Advisory Group to the Afghan Special Mission Wing in Kabul, Afghanistan. LTC Weinshel is married, with two sons. 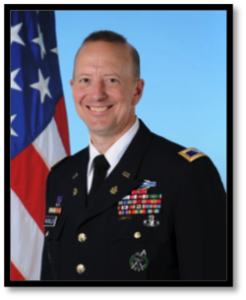 Colonel Wes MacMullen, a native of Doylestown, Pennsylvania, enlisted in the US Army in 1987 as an Electronic Intelligence Signal Interceptor. He served in this capacity at the US Army Field Station in Sinop, Turkey. In 1990, Wes entered the Army ROTC program at Methodist College and earned the honor of Distinguished Military Graduate upon his commissioning as a Second Lieutenant (Infantry) in 1992. As an infantry officer, Wes served in the Panama Canal Zone, Washington, D.C., and Fort Benning, Georgia. In 1998, he transitioned to the Civil Affairs profession. Wes has conducted civil affairs operations in both Iraq and Afghanistan, and his expertise has led him to an assignment to NATO and then to US Africa Command. His most recent assignment was as the Deputy Director for Strategic Outreach, Coordination, and Synchronization—where his responsibilities included Public Affairs, Communications Synchronization, Engagement with Academic Institutions and International Organizations, and US interagency integration in support of US foreign policy objectives. Wes holds a Master’s of Public Administration and a Master’s of Science in International relations from Troy University. COL MacMullen and his wife, Ana, have two children, Bianca and Michael. 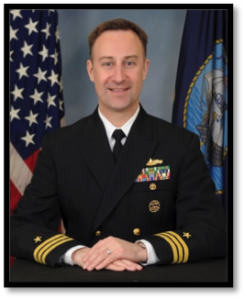 Commander Jay Sego was commissioned in the U.S. Navy as a Surface Warfare Officer in 1999 and has served on a variety of ships throughout his military career. He is from Fayetteville, Arkansas and graduated from the University of Oklahoma with a BA in Marketing. Jay earned an MBA in Financial Management from the Naval Postgraduate School in 2006. His key assignments include Commanding Officer of USS Whirlwind (PC 11) and USS Hurricane (PC 3), Chief Engineer onboard USS Kidd (DDG 100), Deputy Legislative Assistant to the Chairman of the Joint Chiefs of Staff, and Defense Legislative Fellow to Senator Susan Collins (R-ME). Jay has deployed from both coasts serving in the Mediterranean, the Persian Gulf, Asia Pacific, and the South China Sea. 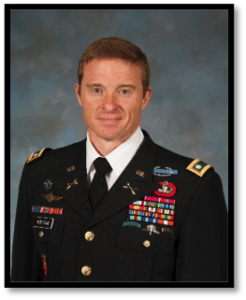 Lieutenant Colonel Joseph W. Wortham was commissioned into the United States Army in 1996 through the ROTC program at Auburn University. He was recognized as the Distinguished Military Graduate of his cohort and subsequently assigned to the Infantry Branch in 1996. His 20 years of service include command and staff assignments in the infantry, Special Forces, and special mission units. LTC Wortham participated in operations in Egypt, Israel, and Lebanon as well as combat operations in Iraq, Afghanistan, and Syria. His understanding of Kurdish culture and training in the Turkish language have supported his repeated deployments to the Kurdish regions of Iraq and Syria. Joe and his wife Chris have two sons, JT, and Micah, and one daughter, Hope.