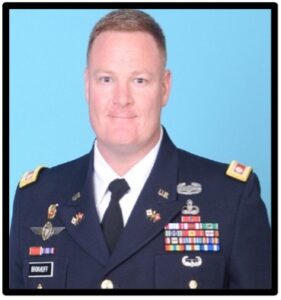 COL Andrew Brokhoff is a career Army officer originally from Atlanta, Georgia.  He commissioned as a signal officer in 1999.  Andy served in multiple command and staff positions to include eight deployments to Iraq and Afghanistan.  He served in the 82nd and 101st Airborne divisions, several special operations units, and the Army and Joint Staff in the Pentagon.  He just finished an assignment as the Communications Director for the Chairman of the Joint Chiefs of Staff. He has a bachelor’s degree in history from the University of North Georgia and a master's degree in cyber security strategy from George Washington University.  After leaving Duke, he will take command of the 516th Signal Brigade in Hawaii.  His research interests include national security, counterintelligence, and defense modernization. 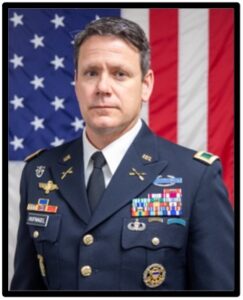 Colonel Justin Hufnagel is a career Army Special Forces Officer originally from Redmond, Washington. He commissioned into the Infantry upon graduation from Gonzaga University in 2000. Justin has served in multiple command and staff positions over the course of his 22-year career including several operational deployments to Iraq and Afghanistan. He holds a Bachelor of Arts degree in Criminal Justice from Gonzaga University and a Master of Science in Defense Analysis from the Naval Postgraduate School. Justin and his wife, Lindsay, have two children, Joshua, and Timothy. His research interests include irregular warfare and the role of Special Operations Forces in nation state competition; SOF, Space and Cyber integration; and Special Operations leader development and education. 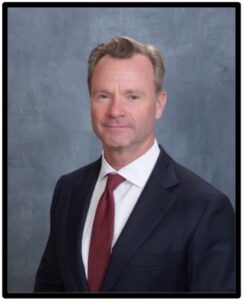 Supervisory Special Agent (SSA) Bracken Murphy Supervisory Special Agent (SSA) Bracken Murphy serves in the Diplomatic Security Service (DSS) of the U.S. Department of State. His career in the Foreign Service began in 2008 in the Los Angeles Field Office where he investigated passport fraud and provided protective security for visiting foreign dignitaries.  His overseas tours include Afghanistan, Pakistan, Peru, and Italy where he was responsible for the safety and security of U.S. diplomatic facilities, personnel and visiting dignitaries.  While assigned to headquarters in Rosslyn, VA, Bracken served as a desk officer for high threat posts in Africa and as the special assistant to the DSS Director.  Bracken has a Master of Science in Political Science from Southern Connecticut State University and a Bachelor of Arts from Campbell University. Prior to joining DSS, Bracken served in the Army as an infantry officer. Bracken’s research interest is focused on effective organizational change within a large bureaucracy.

Unit Chief (UC) Luz Ruiz served as a Supervisory Special Agent-Unit Chief (UC) in the FBI’s Domestic Terrorism Operations Unit (DTOU) before coming to Duke. Prior to that, UC Ruiz served as the Assistant Special Agent in Charge (ASAC) in San Juan, Puerto Rico -- overseeing the Administrative and Criminal Branch to include White Collar, Public Corruption, and Money Laundering programs. After graduating from the FBI Academy in Quantico in 2007, UC Ruiz was assigned to El Paso Field Office where she worked Violent Incident Crimes, Civil Rights, and International Terrorism. She transferred to San Juan Division where she held several positions from Senior Team Leader for the Evidence Response Team (ERT) to Supervisory Special Agent for the Domestic Terrorism and International Terrorism Squads. UC Ruiz holds a doctorate (Ed D) in School Administration and Supervision from the University of Puerto Rico, Rio Piedras Campus, and a post-doctorate degree in National Security, and Terrorism Studies from the American Military University. 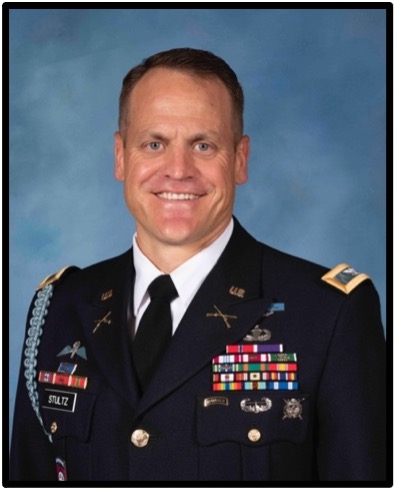 COL James Stultz serves in the US Army as an infantry officer.  He holds a bachelor’s degree from the United States Military Academy at West Point and a master’s degree from the School of Advanced Military Studies.  He has served in operational assignments in the conventional Army to include deployments to Iraq, Afghanistan, and as part of a NATO coalition in the '21 withdrawal from Afghanistan and to southeast Poland in response to the Russian invasion of Ukraine.    James’ research interests include the use of unmanned air/ground vehicles and the emergence of the information/cognitive domain as a means in warfare. 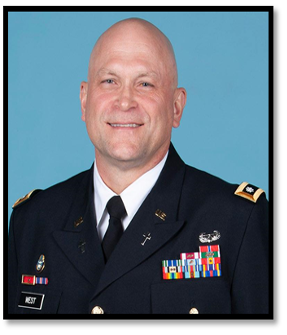 Chaplain (COL) Jay West is an Elder in The West Virginia Conference of The United Methodist Church and has completed 20 years of service as an Army Chaplain. Jay deployed multiple times while serving at the Division, Brigade Combat Team, and Battalion levels, including deployments to Iraq, Qatar, and multiple locations in Europe. He and his family count London (England) and Heidelberg (Germany) as two of their favorite overseas cities. Jay earned a Bachelor of Science degree in Education from West Virginia State University, a Master of Divinity degree from The Methodist Theological School in Ohio, and the Doctor of Ministry Degree from Wesley Theological Seminary. His research interests include alignment within the Chaplain Cops, Chaplain leader development, and the impact of spirituality on policy formation. Jay and his wife Pam enjoying hiking, walking, biking and family time. 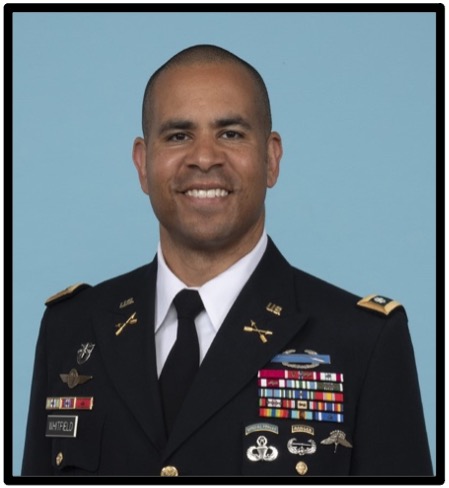 COL Nathan Whitfield is a career Army Special Forces Officer originally from Buchanan, Michigan who now resides in Pinehurst, NC with his wife of 15 years and two children. Graduating from the United States Military Academy at West Point, NY, he commissioned in 2000 as an Infantry officer and became a Special Forces officer in 2005. Nate gained broad experience in command and staff positions over the course of his 22-year career, working with joint, interagency, and international partners and deploying multiple times throughout the Middle East, Central Asia, and northwest Africa.   He has a Bachelor of Science degree in Psychology from West Point and a Master of Science in Defense Analysis from the Naval Postgraduate School. Nate’s research interests include irregular warfare, proxy force operations, and Special Operations leader development and education. Following his studies at Duke, Nate will return to Fort Bragg, NC to command a Training Brigade at the JFK Special Warfare Center and School.