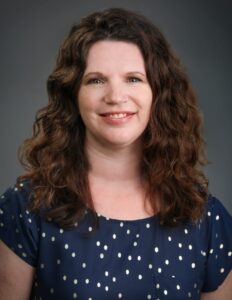 Jennifer Arnold is a senior civil servant in the Department of Defense with specialties in the fields of intelligence and operations.  Jenny was born and raised in Massachusetts.  After high school, she enlisted in the U.S. Air Force and served as an Operations Resource Manager.  While assigned to the Joint Special Operations Command, she supported Operation Southern Watch, Operation Enduring Freedom and Operation Iraqi Freedom.  Jenny holds a Bachelor’s degree in Criminal Justice from Campbell University in North Carolina.  Subsequent to her military service, Jenny served in the Central Intelligence Agency as an Operations/case officer.  Jenny has continued to serve the United States as a civilian leader in the Department of Defense.  She and her husband Dale reside in Fuquay Varina, NC and have three children.  Jenny’s research interests include the counterintelligence implications of Artificial Intelligence and quantum computing on the Department of Defense and Intelligence community. 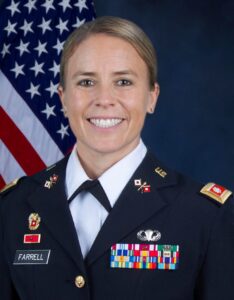 Lieutenant Colonel Randee Farrell is originally from Clifton, Virginia.  She serves as a US Army Public Affairs Officer where her goal is to communicate to the American public how the military supports national security and furthers American ideals at home and abroad. She graduated from the United States Military Academy in 2002 and was commissioned as a Signal officer.  Upon completion of her initial training, Randee served in army units during multiple deployments to Iraq.  Upon completing her Master of Business Administration at Wharton, she became a Public Affairs Officer and focused on marketing at both West Point and for the Army Staff.  Prior to arriving at Duke, Randee served as the lead communicator for special operations forces countering terrorism across North Africa and the Levant.  Randee has served in numerous overseas locations to include Jordan, Syria, and Iraq.  Her research interests include: National Security Decision Making, Behavioral Economics, Brand Management, Marketing Strategy, Journalism, and Social Movements and Social Media. 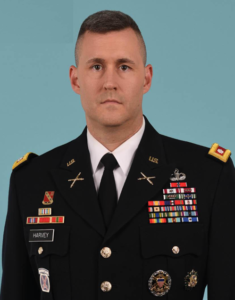 Colonel Jon Harvey is a US Army Field Artillery Officer originally from Nebraska City, Nebraska. He has commanded soldiers at every level from small units to a battalion, and he has extensive staff experience to include the Joint Staff, the Army Staff, and U.S. Forces Afghanistan. His postings have taken him to Fort Bragg, North Carolina, to Korea, to Fort Sill, Oklahoma, to Fort Drum, New York, and to Washington, D.C.  Operationally, he has served in Kosovo, Afghanistan, Haiti (earthquake response), and Iraq. In his most recent position on the Army Staff, he was responsible for managing the current and future Field Artillery force. Jon is a graduate of Eastern New Mexico University with a Bachelor of Science in Political Science and a Master in Military Arts and Sciences from the Army Command and General Staff College. Upon completion of his fellowship at Duke, Jon will assume command of the 18th Field Artillery Brigade at Fort Bragg, North Carolina. Jon, his wife Lain, and his son Fox live in Chapel Hill, North Carolina.  Jon’s research focus while in the fellowship is military senior leader decision making and the Army’s professional military education of staff officers. 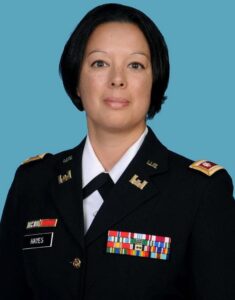 LTC Christina “Tina” Hayes grew up in the suburbs of Cleveland, OH.  Upon graduating from John Carroll University with a B.S. in Chemistry and completing the Army ROTC program, she received a commission in the United States Army Corps of Engineers.  Tina’s professional career has focused on Nuclear Counterproliferation and Countering Weapons of Mass Destruction (CWMD).  Her overseas experiences include Iraq and South Korea.  Tina served in various staff positions in which she focused on WMD threat reduction, military support to domestic WMD threats, and counterproliferation of WMD.  Tina’s graduate education includes a M.S. in Forensic Toxicology from the University of Florida and a M.S. in Combatting Weapons of Mass Destruction from the Air Force Institute of Technology.  Tina is married with 1 son, and currently lives in Spring Lake, NC.  Her research interests include:  biological sciences, nuclear policy, leadership, and women in the military. 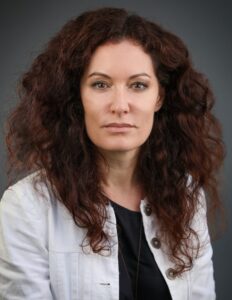 Supervisory Special Agent Margalit Murray is a Diplomatic Security (DS) federal agent in the U.S. Department of State. Margalit grew up in Hilo, Hawaii and the Northern Virginia area. She is a graduate of Boston University (B.A. in Political Science and International Relations) and the George Washington University (M.A. International Law and Security). Margalit received the prestigious Fulbright Scholarship to conduct independent research on how women’s roles were influenced by social and political organizations in Kuwait in 2001, arriving there the day before 9/11. In 2004, Margalit joined the State Department and has served overseas at U.S. embassies in Beirut, Kabul, Tel Aviv and Buenos Aires. Domestically, Margalit served in the DS Washington Field Office and in their Headquarters where she managed federal investigations into human trafficking, visa and passport fraud, sexual assault, child sexual abuse and identify fraud. Most recently, Margalit served as a legislative affairs liaison representing the Department of State’s policies and priorities to Congress. She has extensive experience working across the interagency as well as with foreign partners on U.S. foreign policy goals and programs. Her research interests include understanding the differences and/or similarities in decision-making processes between governments and terrorist organizations, and in delving deeper into terrorist organizations’ beliefs on gender roles. After participating in the Duke Fellowship Program, Margalit will serve as the Senior Regional Security Officer at the U.S. Embassy in Montevideo, Uruguay. 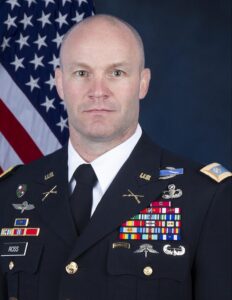 Colonel Matt Ross is originally from Indianapolis, Indiana.  He graduated from West Point in 2001 and accepted a Regular Army commission in the Infantry.  Matt has led multiple elements in and out of combat throughout his career including three Platoons, three Companies, two Special Operations Troops, and a Special Operations Squadron.  Matt has extensive experience working in interagency environments, completed a tour at a US Embassy in the Middle East, and deployed on multiple occasions throughout Europe, South America, and the Middle East.    Matt has a Bachelor of Science in Economics from West Point and a Master of Arts in Leadership from Central Michigan University.  Matt and his wife, Lindsey, have two children, Jonathan and Madison.  Matt’s research interests include counter terrorism and crisis response operations, lean organization management, and the application of Artificial Intelligence and Machine Learning into decision making. 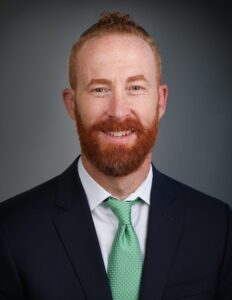 Matthew Whittemore grew up in Bedford, New Hampshire and is a Supervisory Special Agent with the Federal Bureau of Investigation (FBI). Matt’s FBI career began in 2010 working in the Los Angeles Division, Orange County Resident Agency, Joint Terrorism Task Force which included several high profile investigations that led to multiple disruptions and prosecutions of homegrown violent extremists. Additionally, Matt worked as a member of the Los Angeles Division SWAT Team – serving arrest and search warrants on high risk individuals. Prior to his arrival at Duke, Matt served on the FBI Counterterrorism Division’s Fly Team where he embedded with Department of Defense Special Operations Units conducting operational deployments to Iraq, Bosnia, the Republic of the Philippines, and other austere overseas locations in order to identify and counter national security threats. Matt holds a Bachelor of Science from Salisbury University in 2002 and served in various leadership positions as an officer in the US Marine Corps – attaining the rank of captain prior to joining the FBI. Matt’s research interests include: evaluating the current terrorism landscape, assessing the less predictable nature of the threats, and examining the effective integration of counterterrorism intelligence and operations across agency boundaries to minimize the risk of terrorism to the homeland and U.S. interests abroad.