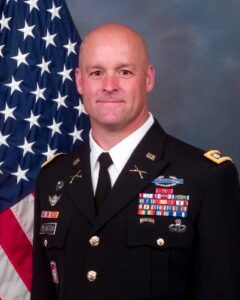 Colonel Joe Blanton earned a bachelor’s degree in English and an active duty commission as an Infantry officer in 1997 through the University of South Carolina.  Joe’s foundational experiences were with the 75th Ranger Regiment and 82nd Airborne Division with several combat deployments.  He transitioned to the Army Acquisition Corps in 2010.  COL Blanton is experienced in complex project management, materiel development and rapid systems acquisition. He attained an MBA in Systems Acquisition Management from the Naval Postgraduate School in 2014.  Joe’s next assignment will be in a key leadership position with SOCOM—Program Executive Officer, SOF Support Activity—responsible for rapid prototyping, manufacturing and sustainment globally. 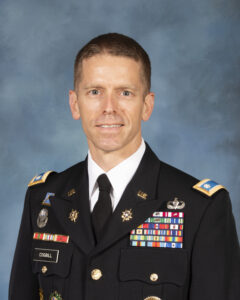 Colonel Jamie Cogbill is an Army intelligence officer from Richmond, VA. He is a graduate of Georgetown University’s School of Foreign Service (B.S.F.S.) and Public Policy School (M.P.M). He joined the Army in 1997, earning his commission through ROTC as a Distinguished Military Graduate. He has commanded intelligence units at the company and battalion level and served on operational assignments in Macedonia, Kosovo, Afghanistan, and Iraq. COL Cogbill has policy experience from assignments to the Office of the Secretary of Defense and Army Staff at the Pentagon, and he has focused on national security threats in Europe, Africa, and the Asia-Pacific. He also served as the senior intelligence officer for the Army’s modernization command, testing and evaluating new and emerging concepts for intelligence and communications systems. 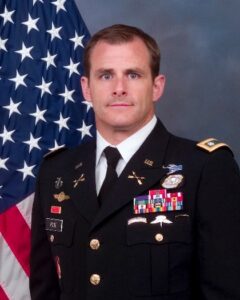 Colonel Michael Rose is a U.S. Army Special Forces officer, originally commissioned into the Infantry in 1997 from the U.S. Military Academy at West Point. Mike has served fifteen of his twenty-one years of service in Special Operations, deploying numerous times to Iraq, Afghanistan, West Africa, and other locations throughout Europe and the Middle East. He has also worked extensively with interagency partners on counterterrorism issues. Prior to attending the Fellowship Program at Duke, Mike commanded a Special Forces battalion and most recently served as the Executive Officer to the Commanding General, Joint Special Operations Command. Mike holds a Master of Arts Degree in National Security and Strategic Studies from the U.S. Naval War College in Newport, RI. 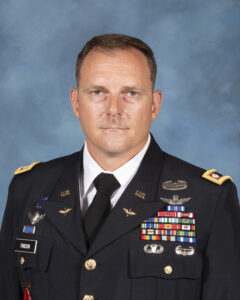 Colonel D. Shane Finison was commissioned into the United States Army in 1997 through the ROTC program at The Citadel where he earned a BA in Political Science.  He was recognized as the Distinguished Military Graduate of his cohort and assigned to the Aviation Branch.  He later earned a Master’s degree in Business Administration from Liberty University.  During his more than twenty one years of service, Shane has served in a variety of Conventional and Special Operations units, commanding as a Captain, Major and Lieutenant Colonel.  He served as the Assistant Professor of Military Science at Duke University, and has significant operational experience in South Korea, Iraq, Afghanistan, and North Africa.